Ioniq 5 N has been testing on the Nurburgring for a while now, the car has been spotted many times in many locations across Europe. It was expected to be unveiled alongside the Ioniq 6 but we were treated to other N creations from Hyundai then. The previous Ioniq 5 N sightings showed a standard body, we managed to spot bigger brakes, bigger wheels and wider fenders, but the design was plain Ioniq 5. No more - this latest set of photos reveals a production-ready performance version that promises to make us grin again...

Starting at the front we see a much wider bumper with big air intakes on each side, the lower lip of the bumper is much lower than on the standard Ioniq 5. There are bigger air vents in the middle as well making sure the battery stays cool during spirited driving. This isn’t a sticker and spoiler type of a performance car - Hyundai designs the N range to be driven hard, whether it’s ICE or electric. The front bumper is wider now and wraps into the wider fenders. The wheels are 21” with a new, twin spoke design hiding giant brake rotors. The tyres will be the same as on Kia EV6 GT - 255/40 R21 which gives you an idea how much power and torque these wheels need to channel to the tarmac.

Scrubbing off the speed is a job for the 380 mm brakes at the front with 360 mm discs at the back. To put that into a perspective - Murcielago LP640 comes with 355mm discs at the front - smaller than the rear brakes on Ioniq 5 N. That’s another proof that Hyundai takes its job seriously. As we go around to the back, we see the new bumper again and new, much larger roof spoiler with the signature, triangular brake light. The bumper is low with sharper edges in the bottom corners with little extension to help smooth out the airflow. The roof spoiler has the same job - to push any turbulence as far back behind the car as possible. It is much bigger than on the standard car.

Hyundai fans are getting impatient, Ioniq 5 N is on the wishlist of many people and the company is taking a long time to develop it. The car will share all the powertrain with Kia EV6 GT together with the 585 hp twin motor and 77.4 kWh battery but the company is already learning from issues with the Kia and trying to make sure the Ioniq ends up being more polished of the two siblings. It is certain we will see the Ioniq 5 N very soon, Hyundai is on the roll with its electric models with every next car surpassing expectations and it will not risk failing here. We can expect a proper tire-eating, giggle-inducing electric machine that is as comfortable doing school runs as it is doing laps at Nurburgring. Hyundai should use the “Grin Revolution” slogan, being green is no longer good or cool enough. Hyundai Ioniq 6 spotted on the street with normal mirrors 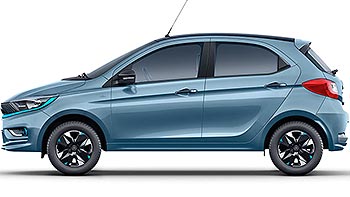