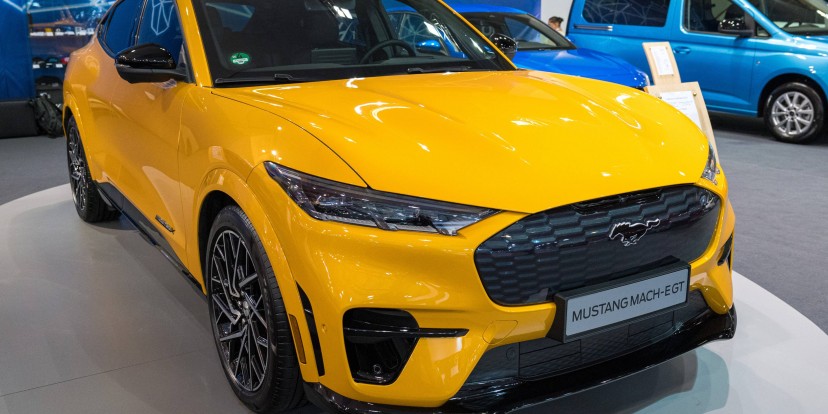 If five years ago someone told you that Ford was going to stretch classic Mustang design to include 4 instead of 2 doors, that it was going to lift the suspension and turn the Mustang into an SUV - you would laugh. You would laugh so hard that you’d probably give yourself a hernia.

Fast forward to 2022 and that 4-door SUV Ford Mustang is a hit. Despite long waiting times for the car itself, despite recalls - most recently stopping owners from driving or charging the car due to risk of it catching fire - and despite some people calling it the abomination, Ford is struggling to keep up with demand for the Mustang Mach-E. 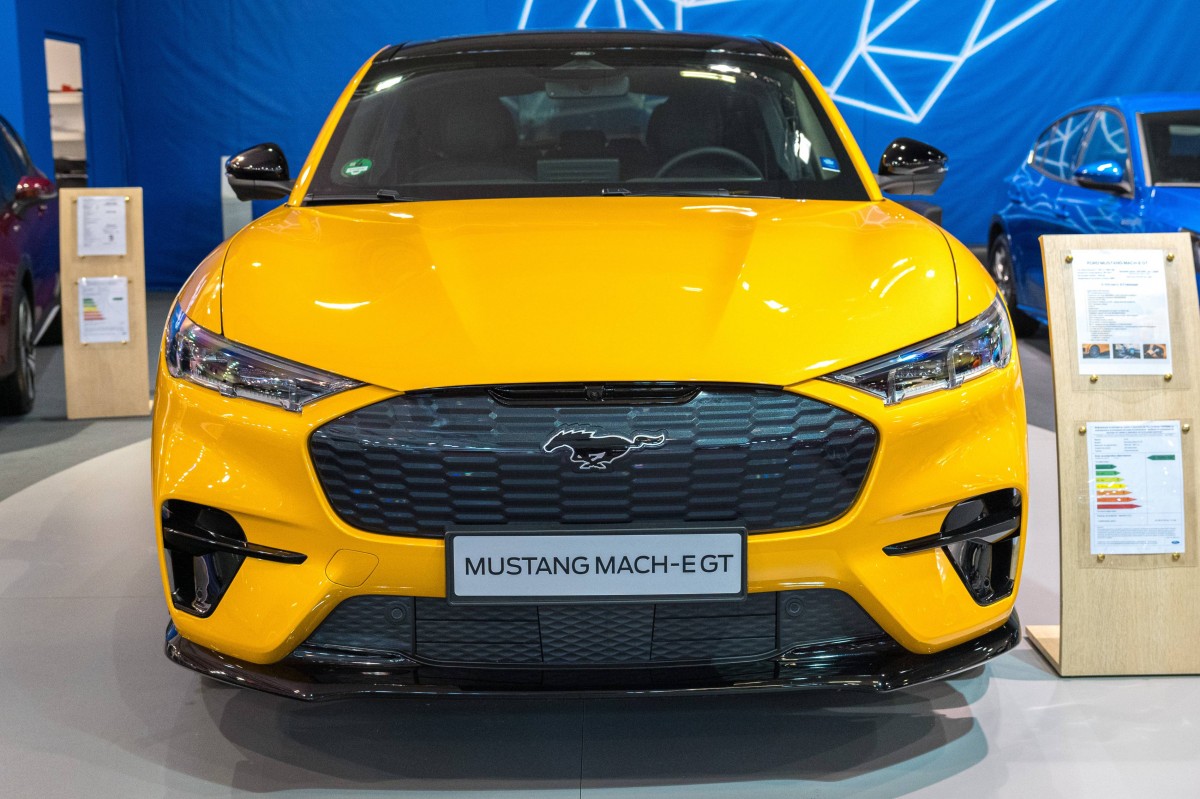 Mustang Mach-E sold 27,140 units in the US in 2021 and in the first 6 months of this year, that number stands at 15,718, in fact the entire 2022 production is sold out. It was enough to make Ford the second largest EV manufacturer in the US, Tesla the runaway leader with 302,000 vehicles. Whether Ford will ever catch up to Tesla or not is a question for another day. Today we are looking at the Mustang Mach-E GT to find out if it deserves the hype or if its demand is merely a product of there not being enough EVs to cope with general demand.

The car we have here is the Mustang Mach-E GT in Cyber Orange - in person it does look bright orange, in photos due to fluorescent lighting it looks yellow. But it really is a nice, bright and warm orange. The car is serious, it’s not a nice kinda fluffy design - no, the Mustang means business. It means performance and you can tell just looking at it that it is a seriously quick car. The front lower spoiler wouldn’t look out of place on a Shelby, here it hangs high in the air thanks to hiked up suspension. Still, it looks mean and purposeful. The squinty, shark-like headlights and the curvy hood do make the car look like a Mustang. But when you come to the side, the whole illustion unravels. The designers were trying to hide the sky-high roof by painting it black, with the bright orange body following a lower line. It’s a clever solution and it works from afar, up close it just makes no sense. 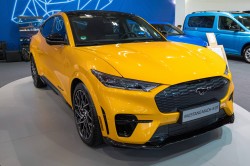 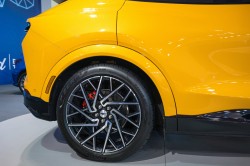 Ford was desperately trying to make sure the Mustang name was not diluted and tried to stick to the design brief. The headlights, the rear lights are reminiscent of the original Mustang, the shape is a bit of a stretch - the cabin is pushed forward, the roof is obviously much higher and when you compare the two cars, the new electric addition to the family doesn't really fit in. 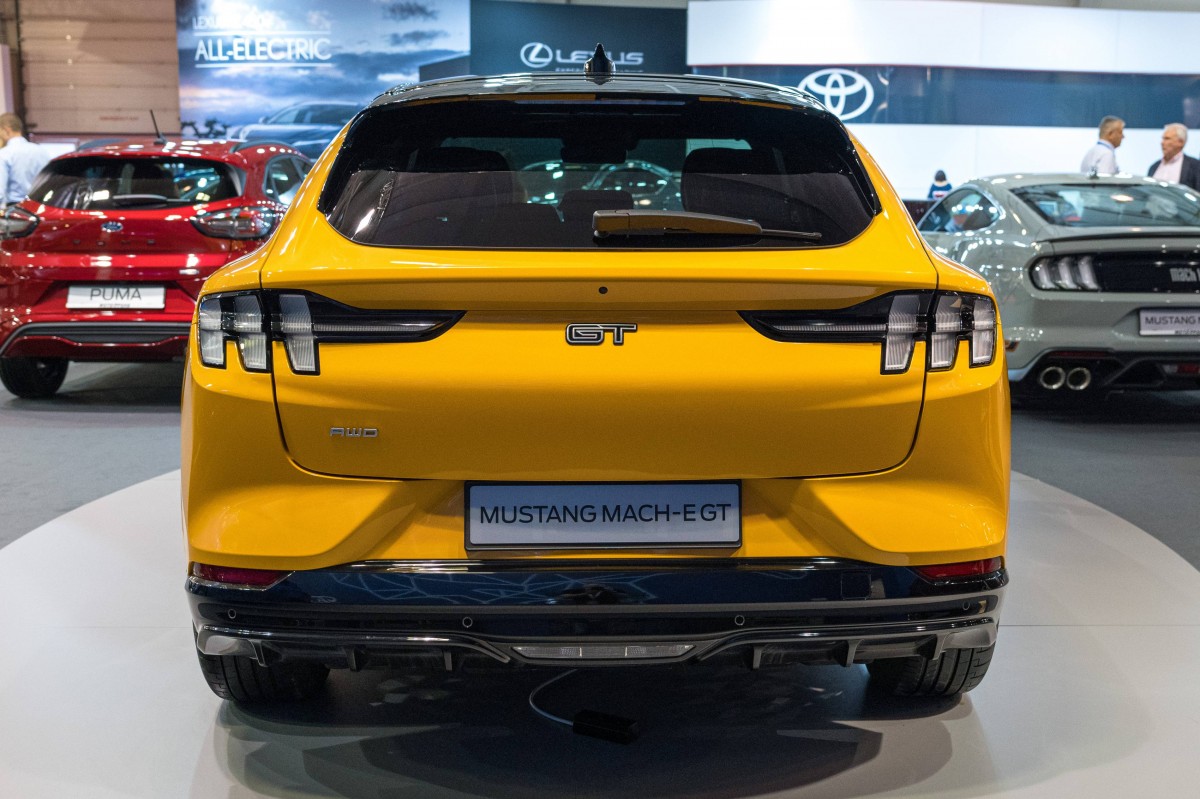 But when you forget for a minute about the 2-door coupe, the 4-door electric Mustang makes a lot of sense. On its own it is a very handsome car. It looks great, it has great proportions, it’s a really good design and it’s no surprise the car is selling like hot cakes. Badge purists can cry salty tears, but to outsiders the Mustang Mach-E looks awesome.

The GT version we have here, comes with 480 horsepower twin-motor AWD drivetrain. The 98.7 kWh battery has a usable 88kWh capacity which is good enough for nearly 500km of range (WLTP). Performance is blisteringly quick - 3.7 seconds from 0 to 100kph will quickly get you away from traffic lights. 20” rims are standard on the GT version and the 245/45 tires bring down the range slightly but help tame the herd of 480 electric horses. The car can charge at up to 150kW at a DC fast charger, which isn’t really amazing but still allows to add up to 119km of range in 10 minutes per Ford's claims. Home charging will be significantly slower but it will be much cheaper if you have the garage or a driveway. 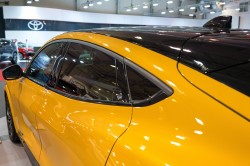 Getting in the car can be a bit confusing at first - there are no door handles. The front doors have a small tab that you pull while pressing on the button on the pillar. Rear doors are even trickier - you need to press the button for the door to slightly open and then grab it by the edge and pull it all the way open. Form over function really or just cleverly disguised extreme cost cutting - it doesn't really matter beyond the first couple of tries as you get used to it. 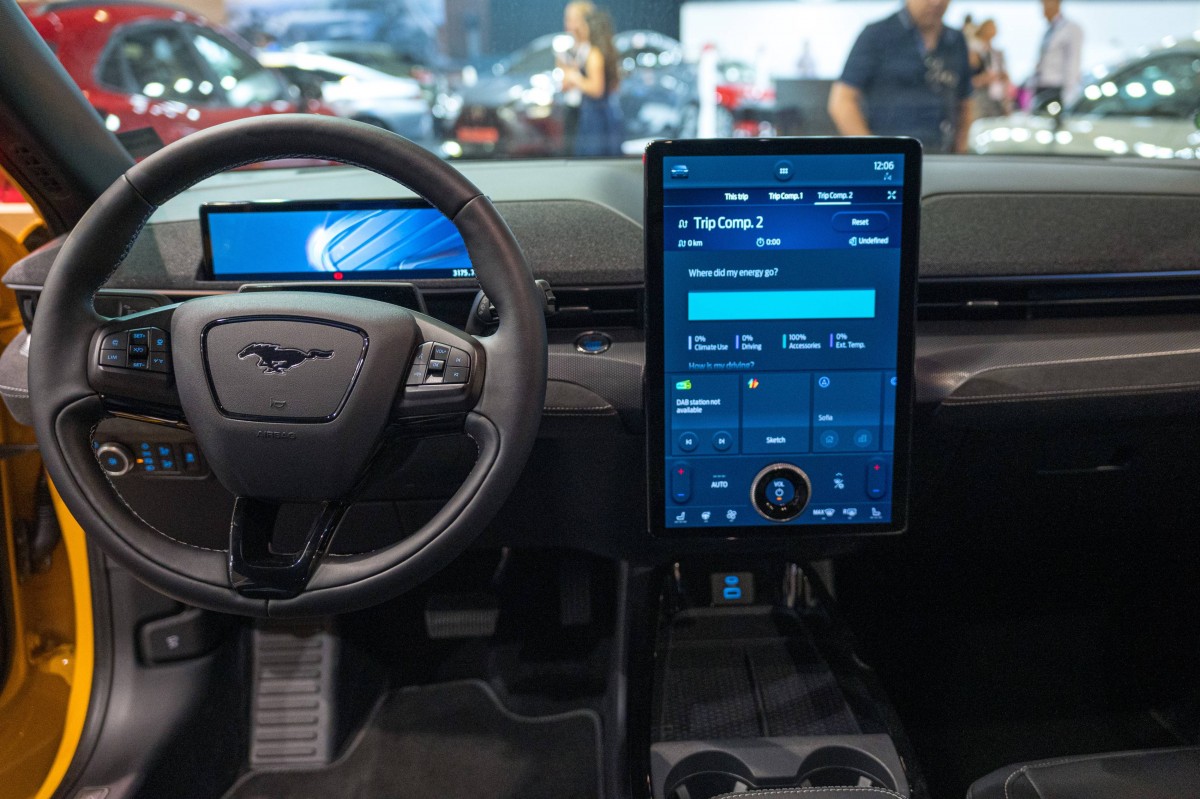 The interior of the Mustang Mach-E is really nice when it comes to quality but the colors are somewhat depressing. The white stitching on the seats is the only lighter shade in a sea of black and gray. Nothing wrong with that - the interior is really nicely put together, the materials are great, the quality is clear to see and overall any driver will feel great sitting inside.

Once you get in the comfortable and highly bolstered sporty seat, you are greeted by a giant vertical screen. Ford opted to keep a mechanical volume control and placed it right in the middle of the screen - a polarizing solution if we saw one. However it's certainly making an impression and the company is using it on the Ford F-150 Lightning so it will most likely become a brand signature. Simple and effective. 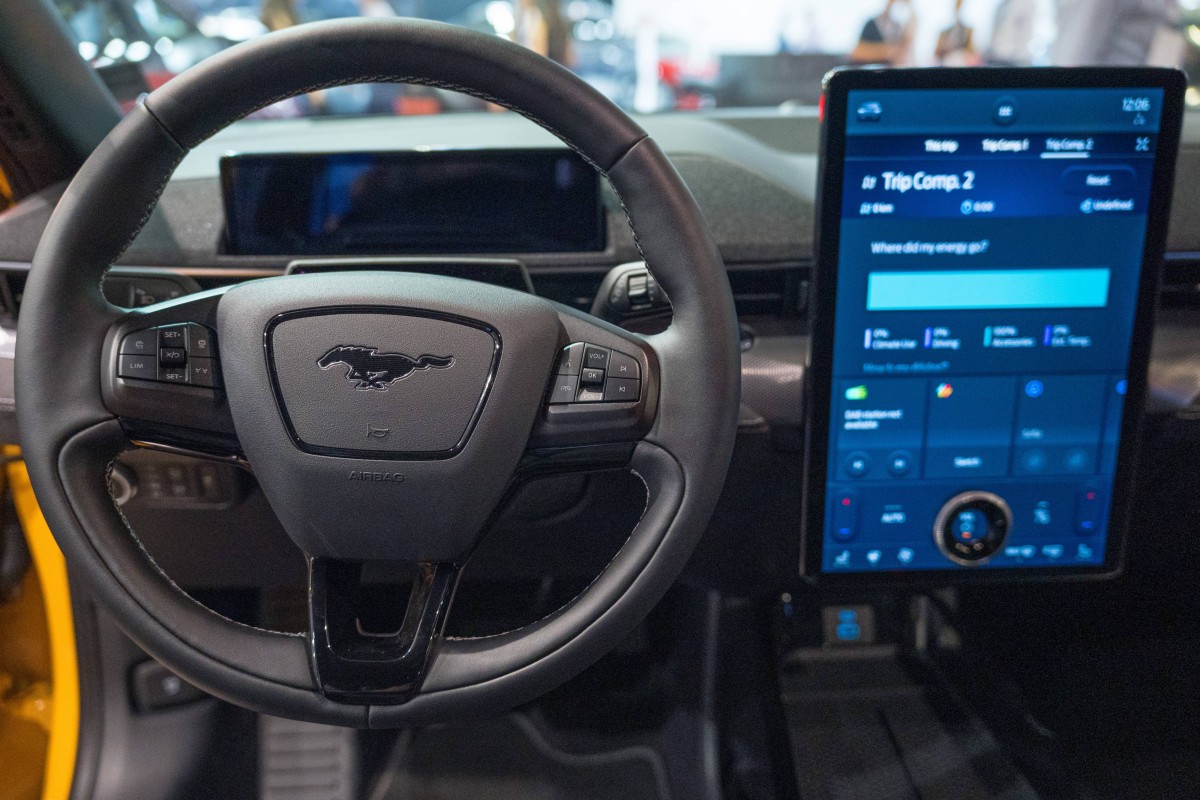 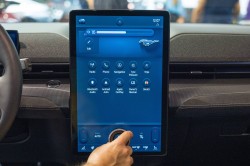 Almost all aspects of the car are controlled via the 15.5” screen, volume and gear selector are the only tactile controls. Apart from the large central screen, there is another, smaller display for the driver and an even smaller one sits directly on the steering wheels column - that one one only displays vital information like emergency lights, indicators and so on.

There is plenty of room in the front and loads of space in the back, 5 adults can comfortably travel without any issues. The headroom and the legroom is more than sufficient for all but the tallest of people. 402 liters of luggage space will fit a reasonable amount of holiday gear although it’s far from the highest volume out there. As far as first impressions go, the Mustang Mach-E GT makes a really good and memorable point. It looks good, it’s very comfortable, it has plenty of room and in the US is priced keenly at $67,990. In Europe it’s a different story altogether - in some countries it can cost as much as €90,000 which surprisingly, still doesn’t deter the potential buyers.

The initial verdict that it's a great car. Fast, comfortable, good looking. But price feels like a rip-off, when you consider that the Mustang Mach 1 with 460 horsepower V8 is €20,000 cheaper in most of Europe. How can possibly EVs hit the mainstream, when a V8 performance classic is cheaper enough to pay for 10 years of fuel with the price difference? There is a long and winding road ahead of us. 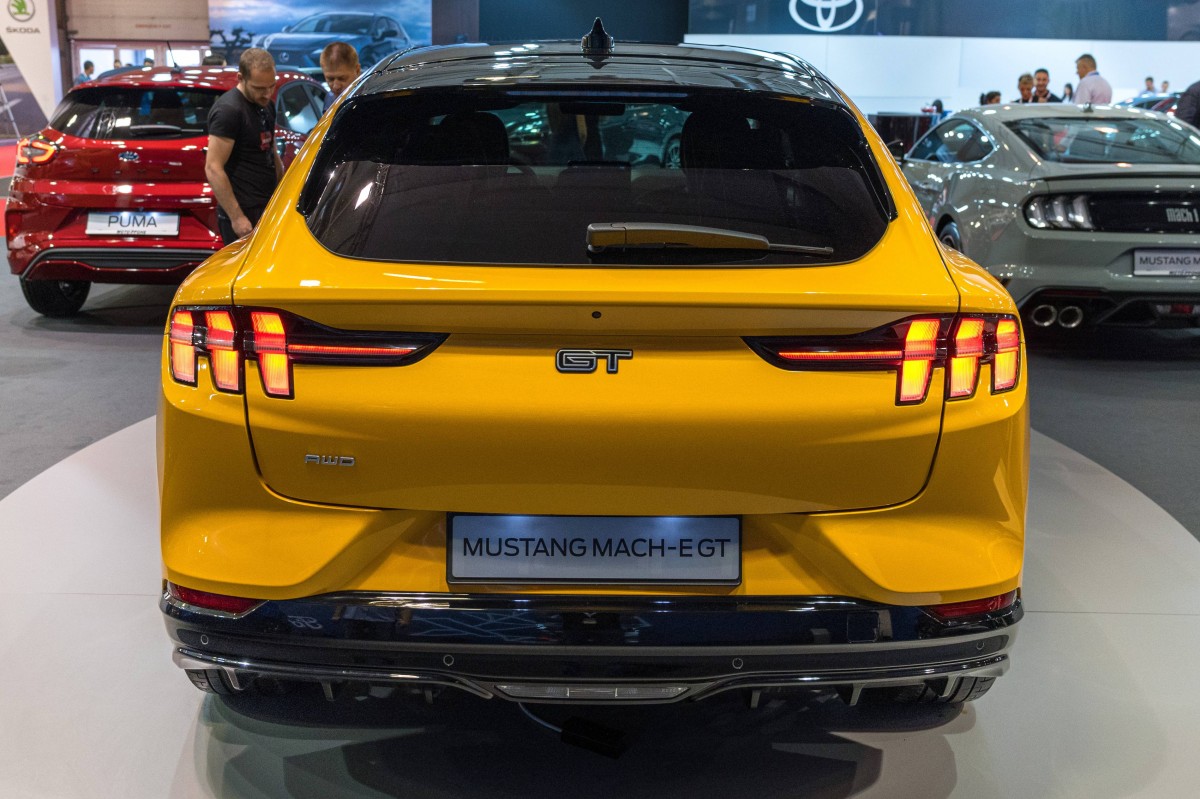 This car looks like a cheap copy of any Korean product, influenced by Tesla.